Indonesia's campaign of terror and agony against PAPUA 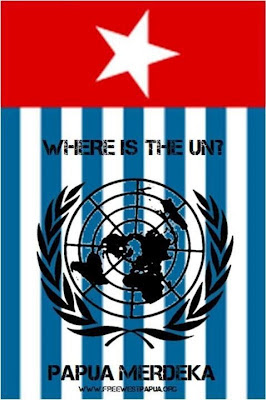 During a cabinet meeting, Indonesian President Susilo Bambang Yudhoyono said "The recent incidents in Papua can be considered small-scale, with a limited number of casualties." Such lies of the highest order. Indonesia is a colonist, a brutal, oppressive Institution that has wrecked Papua with bullets, explosives, blades, bulldozers and lies.

The Indonesia military (TNI) along with the police have repeatedly violated and demonized the Papuans, in their quest to enslave the indigenous people. This is genocide. Such hypocrisy of the human rights image that the conquerors seek to embrace, their propaganda to the world. Genocide is genocide, there is no other way to dilute the suffering and misery of the Papuans. And yet the world, and the region (ASEAN) do nothing but nod their heads in pity but continues equipping TNI with more high-grade weaponry ~ for the simple reason of greed and to seek the extinction of the Papuans.

What has taken place in West Papua is not a mere isolated riot or a random protest for justice. The Papuans struggle and fight a war of resistance against the fascist empire of Indonesia. The Institution of Oppression must be abolished, and all their cohorts be sent back to Indonesia. There is no other way. Peace in Papua cannot be achieved by conquest, but it will materialize by the retreat of the invaders. Such is life, and the Papuans seek, with tears, gore and blood, to stand on their ancient land, free to bask in the sunshine and embrace each other, free from slavery. An independent nation for and by Papuans.